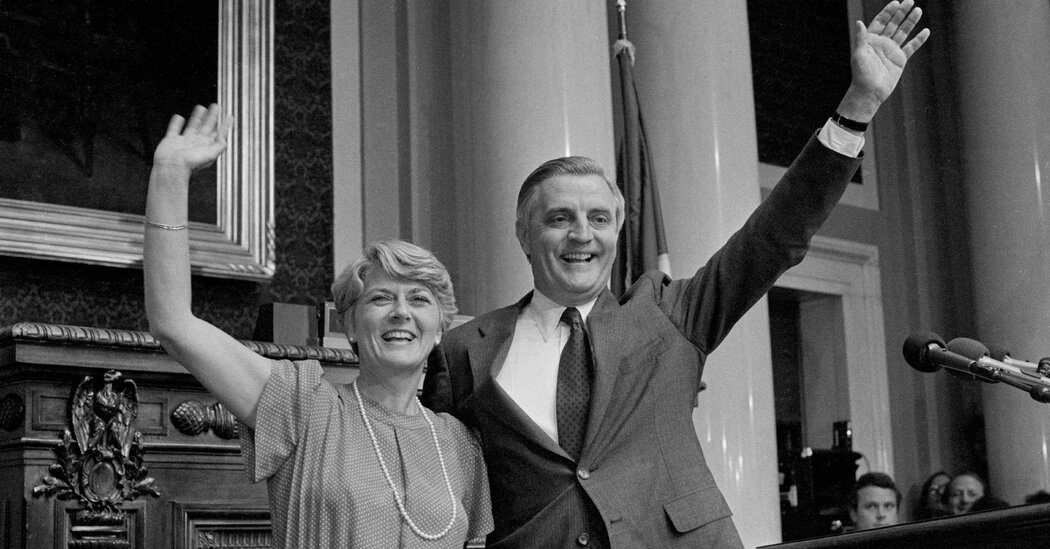 When Geraldine Ferraro was picked to run on Walter Mondale’s presidential ticket, in 1984, the media did not know quite what to do with her. The political press experienced a female vice-presidential candidate as a kind of processing error. Journalists expressed suspicion of Ms. Ferraro’s use of her maiden name and confusion about how she would take care of her children.

“What does the inside of her house look like?” one reporter wanted to know. Image consultants advised her to “dress like a woman” and “choose natural fabrics instead of synthetics.” NBC’s Tom Brokaw, broadcasting from the floor of the Democratic National Convention, reported: “Geraldine Ferraro, for the record — and this is not a sexist remark — is a size 6!”

When Ms. Ferraro took the stage at the convention to formally accept the nomination, she did not say much about being a woman, a wife, a mother or a wearer of natural fabrics. Instead, she fashioned her gender into a metaphor, floating it as a symbol of broader change, progress and the realization of the American dream.

“By choosing a woman to run for our nation’s second highest office, you send a powerful signal to all Americans: There are no doors we cannot unlock,” she said. “If we can do this, we can do anything.” Or as Mr. Mondale put it, “When we speak of the future, the message is Geraldine Ferraro.” In the wake of the 1984 campaign, this registered not just as a rhetorical flourish but a premonition. The Ferraro pick “may lead to the vice-presidential spot being ‘the woman’s spot,’” Lee Atwater, a Reagan strategist, said. Senator Lloyd Bentsen of Texas wondered that year whether he would be the “last white Anglo-Saxon male to be considered for the vice presidency.”

Not exactly. Tonight, Senator Kamala Harris will become just the third woman, and the first woman of color, to be nominated for the vice presidency on a major party ticket. Since Ms. Ferraro’s run, Hillary Clinton broke a higher barrier, becoming the Democratic nominee for president, and a historic number of women ran for president this year, including Ms. Harris. Still, the expectations and fears around this moment have been tumbling around the American psyche for more than 35 years. The identity of a vice-presidential candidate is, research suggests, unlikely to swing voters, but that has not dampened its force as a media narrative, a historical event, a television spectacle and an assessment of America’s relationship to gender and power — one that culminates in the candidate’s formal acceptance speech, which Ms. Harris will deliver from Wilmington, Del.

The speech is an intensely stage-managed feat of party political messaging, and when a woman delivers it, her gender is mined for its full metaphorical weight. Ms. Ferraro, a congresswoman from Queens who took the stage as a brass band blasted “New York, New York,” fused her persona with the American project, framing herself as the “daughter of working Americans” and “the daughter of an immigrant from Italy.” At the 2008 Republican National Convention, Senator John McCain’s running mate, the Alaskan governor, Sarah Palin, appeared before a kind of screen saver montage of Americana — golden light dappling Mount Rushmore, sun setting behind a Ferris wheel — as she leveraged her gender to position herself as the ultimate political outsider, rebuking “the Washington elite” that had waved aside her candidacy with a markedly sexist tone. (Both speeches were steered by male speechwriters.)

The vice-presidential pick lifts a mirror to the would-be president. She heightens the candidate’s deficiencies while also assuring the public that he is self-aware enough to correct for them. When Mr. Mondale tapped Ms. Ferraro, she was judged the most interesting thing about him: “He’s not Ronald Reagan and he picked Geraldine Ferraro,” Alan Baron, a Democratic analyst, said. Tim Russert, the late broadcaster, cast her as a kind of personality infusion: “a new chemistry, a new passion, a new emotion that cannot be measured by any popularity polls.” In 2008, Ms. Palin was hailed as a “bold choice,” the human projection of Mr. McCain’s self-styled “maverick” streak.

During the Democratic primaries, Joseph R. Biden Jr., vying against a number of female candidates, anticipated criticisms of his own candidacy by pledging to appoint a woman as his running mate without specifying which one. He has since framed his selection of Ms. Harris as a confirmation of his own secure masculinity, yet another opportunity to draw a contrast with President Trump. “Is it any surprise,” Mr. Biden said as he formally welcomed Ms. Harris to the ticket, “Donald Trump has a problem with a strong woman?”

A woman as vice president presents a rhetorical shortcut for hope and change, but as the ticket’s second-in-line, she represents a measured and incremental form of progress. She is forever waiting in the wings to secure her own power. “Vice president, OK, fine,” Barbara Walters told Ferraro in a 1984 interview. “But do you think you’re equipped to be president?” This line of thinking has grown even less subtle this year; at 77, Mr. Biden would be the oldest person ever elected to the White House. As one Trump campaign staffer put it to The Washington Post, “Joe Biden’s vice-presidential nominee will be his political ‘living will.’”

According to research produced by the Barbara Lee Family Foundation, women are expected to execute a highly particular personality performance to win elections. Voters want a female candidate who projects confidence but does not take herself too seriously. They want to see her framed casually in community settings, graciously sharing credit for her successes, not hoarding her power behind a mahogany desk.

If she has children, she is expected to explain how she will square her family life with her public office. If she does not have children, she is expected to project a maternal instinct toward members of her extended family. Though voters recognize that this represents a double standard not applied to men, “they still actively participate in perpetuating it,” the foundation has found. This is the kind of gender balancing act that, even when faithfully executed, risks appearing stilted and calculated, as Mrs. Clinton was often accused of being. Mr. Trump has already tried painting Ms. Harris with the same brush, announcing her as a “phony.”

In 1984, Ms. Ferraro broached the subject of her family gingerly, nodding briefly to her husband and three children at the end of her acceptance speech. She warned her daughters not to let the press see them cry. Ms. Palin, in her convention address, leaned into her “hockey mom” image and subverted the media critique that her motherhood could compromise her ability to lead.

Last week, in her first public remarks as the vice-presidential candidate, Ms. Harris presented herself as a kind of all-purpose maternal figure tending to stepchildren, godchildren and nieces. She spoke of cheering at swim meets, cooking Sunday dinner and hugging babies. “I’ve had a lot of titles over my career, and vice president will be great,” she said, “but ‘Momala’ will always be the one that means the most.”

While a male vice president might be cast as a shadow president (as Dick Cheney was to George W. Bush) or a “BFF” (Mr. Biden to Barack Obama), female candidates have been interpreted through the script of romantic partnership. Ms. Ferraro was styled as a kind of national wife; at one point during the campaign, she was photographed lugging an oversized box of laundry detergent out of a grocery store, a prop in the theater of public motherhood. Susan Bixler, an image consultant, said at the time that the double-breasted white dress and string of pearls Ms. Ferraro wore for her acceptance speech made her look “like a bride starting a marriage.” (The dress, which was acquired by the Smithsonian Institution, has since been reinscribed as a nod to the suffrage movement.)

According to Michael Grant, a columnist for The San Diego Union-Tribune, aides preparing Mr. Mondale and Ms. Ferraro for their convention debut worried that their presidential candidate might literally confuse his running mate for his wife Joan. “Strategists feared that during the excitement on the podium,” Mr. Grant wrote, “Mondale would reach left reflexively and hug his vice-presidential running mate, and possibly kiss her before he realized what was happening.”

In 2008, the news media framed Ms. Palin less as a wife than as a passing sexual spectacle. David Carr, The New York Times media columnist, wrote that the leering press viewed Ms. Palin as “a calendar model for a local auto body shop”; Marty Peretz of The New Republic called her “pretty like a cosmetics saleswoman at Macy’s.” When Ms. Palin echoed Ms. Ferraro, donning a cream jacket and pearls for her own convention speech, the press did not register it as a bridal display or a nod to feminist history but as a hypocritical expense — the jacket was Valentino — unfitting of her folksy persona.

Even before Mr. Biden announced his choice, a coalition of women’s groups set to work anticipating sexist attacks against Ms. Harris, warning the media against questioning her ambition and scrutinizing her looks. But old tropes linger, even as they are recast as feminist insights into sexist political dynamics. Writing in The Los Angeles Times, Virginia Heffernan compared Mr. Biden’s search for a female vice president to the lead of “The Bachelor” auditioning wives: “It’s a little weird to watch an old man set out to choose a younger woman to take to the ultimate fantasy suite, the White House,” she wrote.

Ms. Harris, the first Black woman on a major party ticket, has inspired a new level of backlash. Commentators — in some cases following the president’s lead — have questioned not only her gender but also her blackness and her Americanism. They have circulated vile smears about her sex life. Like Ms. Ferraro, Ms. Harris has emphasized her experience as the daughter of American immigrants (her father came from Jamaica, her mother from India). Ms. Harris’s story “is America’s story,” Mr. Biden has said. But unlike when Ms. Ferraro told this tale, Ms. Harris’s story has been met with a revived round of the racist birther conspiracy theory first lodged against Mr. Obama.

On Fox News, Tucker Carlson flatly refused to pronounce her name correctly. While the political establishment has long pitched white women as subordinate political partners and sunny symbols of moderate change, this Black woman is positioned at the extremes: She is either a liberal superwoman imbued with innate moral powers or a threatening radical bent on tearing the country apart. In the days after her selection, Mr. Trump called Ms. Harris “angry,” “mad,” “horrible” and “nasty.”

In a non-pandemic election year, a candidate’s convention debut feeds off the energy of the crowd — the convention floor is usually filled with a curated crew of party delegates, fashioned as an authentic representation for the will of the people. In 1984, the crowd pre-empted Ms. Ferraro’s speech for several minutes as it chanted “Gerry!” again and again. “It was almost like a dance, between me and these people,” Ms. Ferraro said later. When Ms. Palin took the stage in 2008, the audience took her cue and turned on the media, chanting “Shame on you!”

The embrace of the crowd instantly lifts the candidate’s own narrative above the din of commentary. But this year, the coronavirus has dampened the carnivalesque atmosphere of the typical convention. The Democrats have replaced it with a socially-distanced program that recalls the aesthetics of a telethon, with prerecorded performances and far-flung satellite-linked speeches delivered into silence. Ms. Harris steps into the future alone.