What You Need to Know Today: Coronavirus, Boris Johnson, Wisconsin

What You Need to Know Today: Coronavirus, Boris Johnson, Wisconsin 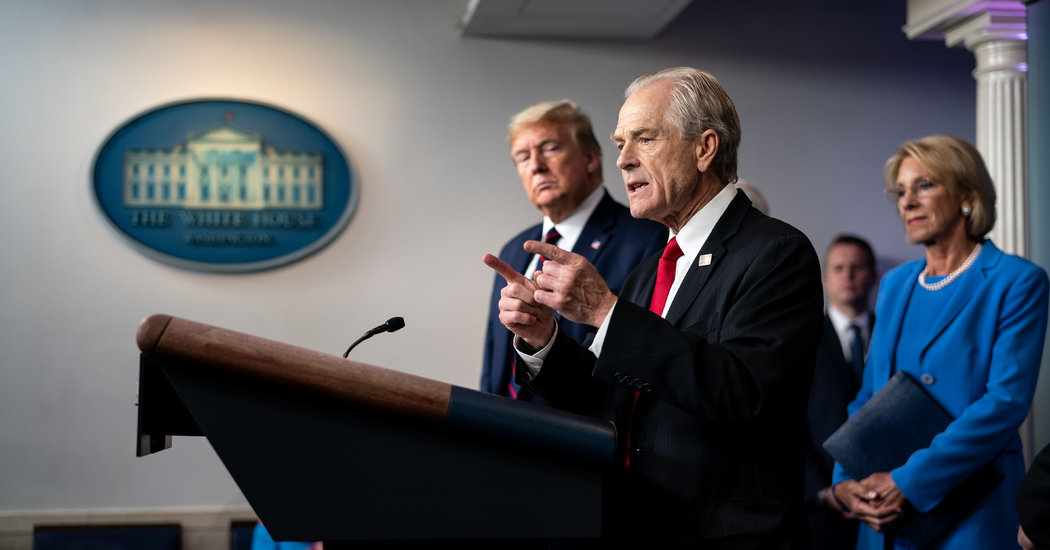 An early warning for the White House

A memo by Peter Navarro, President Trump’s trade adviser, warned in late January that failing to contain a coronavirus outbreak could cost the U.S. trillions of dollars and put millions of Americans at risk of illness or death.

“The lack of immune protection or an existing cure or vaccine would leave Americans defenseless in the case of a full-blown coronavirus outbreak on U.S. soil,” Mr. Navarro’s memo stated.

The memo, dated Jan. 29, was the highest-level alert known to have circulated in the West Wing. It came as the administration was taking its first substantive steps to confront the crisis but during a period in which the president was also playing down the risks.

Here are the latest updates and maps of the pandemic.

The growing death toll in the U.S.

The country’s first 5,000 deaths from the coronavirus occurred in just over a month. The second 5,000 came in less than five days. Our map shows how quickly the numbers have risen.

The New York metro area accounts for more than 40 percent of U.S. deaths, although Gov. Andrew Cuomo offered some promising news on Monday, saying that death and hospitalization rates in the state had started to stabilize. He again cautioned New Yorkers to maintain distancing measures.

The details: When will New York City reach the peak of the outbreak? Public health officials say it may be soon, or it may be a month away. Here’s what we know.

Watch: It doesn’t take long for mild symptoms to become serious. Our video explains how the virus invades the lungs.

Four benchmarks for a return to normalcy

How do officials know when it’s time to reopen public spaces and start to bring life back to normal? Researchers recently outlined some markers:

1. Hospitals must be able to safely treat all patients requiring hospitalization, without resorting to crisis standards of care. That means having adequate beds, ventilators and staff.

2. The authorities must be able to test everyone who has symptoms, and to get reliable results quickly. That would be well more than 750,000 tests a week in the U.S.

3. Health agencies must be able to monitor confirmed cases, trace contacts of the infected, and have at-risk people go into isolation or quarantine.

4. There must be a sustained reduction in cases for at least 14 days, because it can take that long for symptoms to appear.

If you have 4 minutes, this is worth it

New research into the deadly influenza pandemic in the early 20th century found that U.S. cities that committed earlier and longer to banning public gatherings and closing schools didn’t fare worse for disrupting their economies for longer.

Minneapolis, for example, acted quickly, and had a considerably lower mortality rate than St. Paul, just across the Mississippi River. It appears that the economy in Minneapolis emerged stronger, too.

The new study, by researchers at the Federal Reserve and M.I.T., comes amid a debate over the health benefits and economic costs of distancing.

Abuse conviction is overturned: Cardinal George Pell, the highest-ranking Roman Catholic leader ever found guilty in the church’s clergy pedophilia crisis, walked free today after Australia’s highest court ruled that the jury ought to have entertained doubt about his guilt.

Kennedy family accident: The body of Maeve Kennedy Townsend McKean, 40, a granddaughter of Robert F. Kennedy, was recovered after she and her son went missing last week when their canoe capsized in the Chesapeake Bay. The search continues for her 8-year-old son, Gideon McKean.

Snapshot: Above, a caribou in the Arctic National Wildlife Refuge in Alaska. A writer for our Travel section reflected on a six-month, 4,000-mile journey to the area and its lessons about moving forward in a time of uncertainty.

In memoriam: E. Margaret Burbidge, who was once denied the use of a telescope because of her sex, went on to make pathbreaking findings about the cosmos. She died on Sunday at 100.

What we’re watching: The latest episode of “Some Good News With John Krasinski” highlights reasons for optimism in our current moment, including a video conference surprise for a 9-year-old girl whose birthday trip to “Hamilton” was canceled.

Late-night comedy: After the C.D.C. recommended that Americans wear masks in public, President Trump said he wouldn’t be doing so himself. The hosts were puzzled.

Cook: Is there anything more satisfying than a bowl of pasta carbonara? It’s today’s pantry staple dish from our food columnist Melissa Clark.

Call: Along with Melissa, Sam Sifton, who oversees our culture and lifestyles coverage, will be holding a group call with readers today at 5 p.m. Eastern to discuss their food inspirations and answer your recipe questions. R.S.V.P. here or check the full calendar of live calls and virtual events with our journalists.

Our first coronavirus live briefing was published by the Hong Kong bureau on Jan. 23, in the early days of the outbreak. It has been running ever since, managed in shifts among newsrooms in Hong Kong and London and the headquarters in New York.

“It’s the longest-running live thing The Times has ever done,” said Rebecca Blumenstein, a deputy managing editor. “We’ve never done anything of this scale before.”

Editors and reporters from nearly every desk have volunteered to help lighten that workload. Others were drafted to serve on the digital front lines.

Michael Cooper, who normally covers classical music and dance, has been working on the briefing, which requires him to swiftly process and report on a deluge of information.

“It’s like drinking from a fire hose,” Mr. Cooper said. And on top of the constantly shifting story lines, Times employees have mostly been working from home since March 13.

“We’re pretty used to improvising,” Mr. Cooper said. “When I used to cover plane crashes, you would make a little bureau on a folding table at some disaster site and work from there. We’re used to doing things from strange places.”

That’s it for this briefing. See you next time.

Thank you
Melissa Clark provided the recipe, and Theodore Kim and Jahaan Singh provided the rest of the break from the news. John Otis wrote today’s Back Story. You can reach the team at briefing@nytimes.com.

P.S.
• We’re listening to “The Daily.” Today’s episode is about today’s Wisconsin’s primary election.
• Here’s today’s Mini Crossword, and a clue: Cup of joe (four letters). You can find all our puzzles here.
• High school students across the U.S. can now enjoy free access to The Times, through July 6.