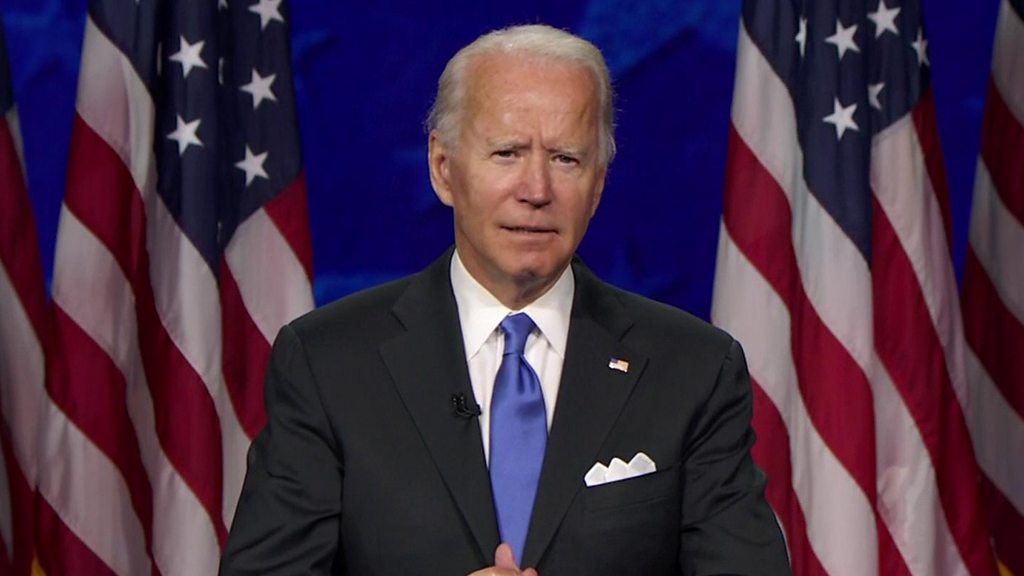 The former US vice-president said his rival has unleashed “too much anger, too much fear, too much division”.

His impassioned speech was the capstone of a political career spanning nearly half a century.

Mr Biden, 77, heads into the general election campaign with a clear lead in opinion polls over Mr Trump, 74.

But with 75 days to go until the election the Republican president has plenty of time to narrow the gap.

What did Biden say?

Speaking from a mostly empty arena in his hometown of Wilmington, Delaware, Mr Biden said: “Here and now, I give you my word, if you entrust me with the presidency, I will draw on the best of us, not the worst.

“I’ll be an ally of the light, not the darkness.

“It’s time for us, for we the people, to come together. And make no mistake, united we can and will overcome this season of darkness in America.

Mr Biden said “character is on the ballot” this November.

“We can choose a path of becoming angrier, less hopeful, more divided, a path of shadow and suspicion,” he said.

“Or, or, we can choose a different path and together take this chance to heal, to reform, to unite. A path of hope and light.

“This is a life-changing election. This will determine what America going to look like for a long, long time.”

Mr Biden vowed to heal a country crippled by a deadly pandemic and economic catastrophe and riven by a reckoning on race.

He continued: “What we know about this president is that if he’s given four more years, he’ll be what he’s been for the last four years.

“A president who takes no responsibility, refuses to lead, blames others, cosies up to dictators and fan the flames of hate and division.

“He’ll wake up every day believing the job is all about him, never about you.

“Is that the America you want for you, your family and your children?”

Referring to America’s coronavirus death toll, Mr Biden said: “Our current president has failed in his most basic duty to the nation: he has failed to protect us.”

Paraphrasing the Irish poet Seamus Heaney, he concluded: “This is our moment to make hope and history rhyme.”

That was Warren G Harding’s campaign slogan when he ran for president in 1920, with a campaign centred around healing and calming Americans after the trauma of World War One.

In his winning presidential bid, he preached healing, serenity and restoration. To put it in modern terms, an end to all the drama.

Mr Biden bills his campaign as a “battle for the soul of this nation”, but his message on Thursday night – the message of many of the Democratic speakers this week – was not so different from Harding’s.

There was a lot of pressure on Mr Biden to deliver with this speech, particularly when Republicans have suggested the 77-year-old was in decline or “diminished”.

At least for one night, the former vice-president, who has given rousing stemwinders in the past, hit all his marks. He was angry when he had to be, and reassuring when needed to be.

Mr Biden gave a powerful speech, delivered powerfully. If he loses in November, it won’t be because of anything that happened on Thursday night or at the convention this entire week – which is exactly what a party currently leading in the polls wants.

What else happened at the convention?

But there was no balloon drop, cheering throngs, or any of the other fanfare and razzamatazz of the typical American party conference, because of the coronavirus pandemic.

Organisers opted instead for a virtual set piece of mostly pre-recorded speeches crunched into two hours of highly produced programming each evening.

Thursday night’s climax was hosted by actress Julia Louis-Dreyfus, the star of US political satire Veep and a vocal critic of Mr Trump.

Throughout the evening, Democrats who had challenged Mr Biden for the nomination praised his leadership in a taped messages.

Speakers at the convention over the past three nights have depicted Mr Trump as incompetent, selfish and a danger to democracy, imploring Americans to vote him out of office – a tone that Mr Biden echoed.

The daughter of Indian and Jamaican immigrants assailed Mr Trump’s “failure of leadership” and amplified the cries for racial justice that have convulsed the nation.

“There is no vaccine for racism. We have got to do the work,” the 55-year-old said, adding: “None of us are free until all of us are free.”

How is Trump responding?

Earlier on Thursday, Mr Trump – who has nicknamed his challenger “slow Joe” and “sleepy Joe” – visited Mr Biden’s birthplace of Scranton in the presidential swing-voting state of Pennsylvania.

“Biden is no friend of Pennsylvania,” Mr Trump said, accusing his opponent of destroying American jobs through global trade deals, the Paris climate accord and clean energy plans.

He said: “If you want a vision of your life under a Biden presidency, think of the smouldering ruins in Minneapolis, the violent anarchy of Portland, the blood-stained sidewalks of Chicago and imagine the mayhem coming to our town and every single town in America.”

As the Democratic nominee was still speaking on Thursday, the Trump 2020 campaign issued a statement, dismissing Mr Biden as “a pawn of the radical leftists”.

Spokesman Tim Murtaugh said: “His name is on the campaign logo, but the ideas come from the socialist extremists.”

Next week, Mr Trump is expected to accept his nomination as the Republican candidate from the White House lawn during his party’s convention, which has been drastically scaled down because of the pandemic.

Who is Joe Biden?

Mr Biden became a US senator from Delaware in 1973, working his way up to the chairmanship of the chamber’s judiciary and foreign relations committees.

After two unsuccessful White House campaigns, in 1988 and 2008, he became vice-president to Barack Obama, the nation’s first black president, serving as his deputy from 2009-17.

Only in February this year, Mr Biden’s third run to become the Democratic White House nominee seemed on the verge of collapse.

Then black voters in South Carolina’s primary rewarded him with a victory that made his candidacy seem all but inevitable virtually overnight.

Mr Biden has faced questions about his age – he would be the oldest president ever elected. And his lengthy centrist record has come under heavy scrutiny in a party that has been gravitating leftwards.

But he was able to rally the unruly progressive and moderate wings of his party to his banner by persuading Democratic voters that he has the best chance of defeating Mr Trump. 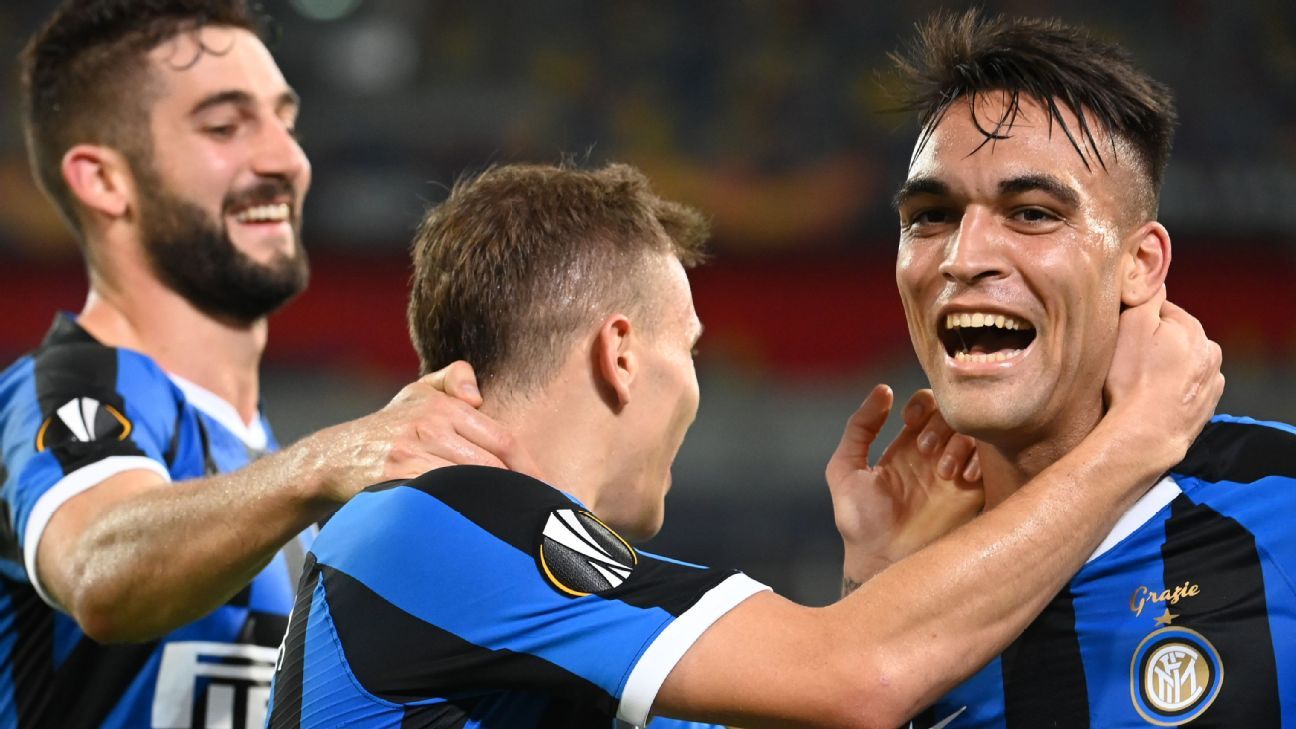 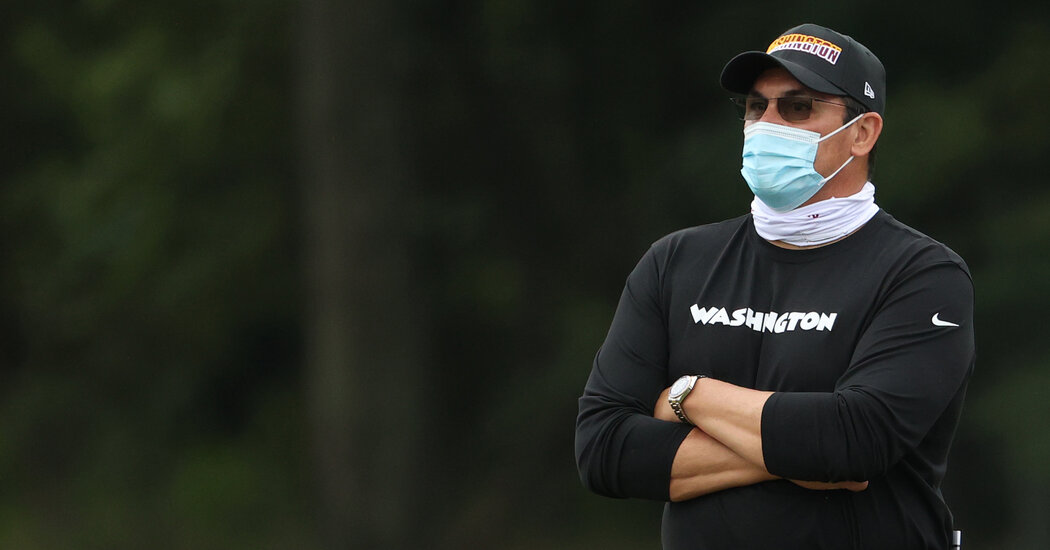 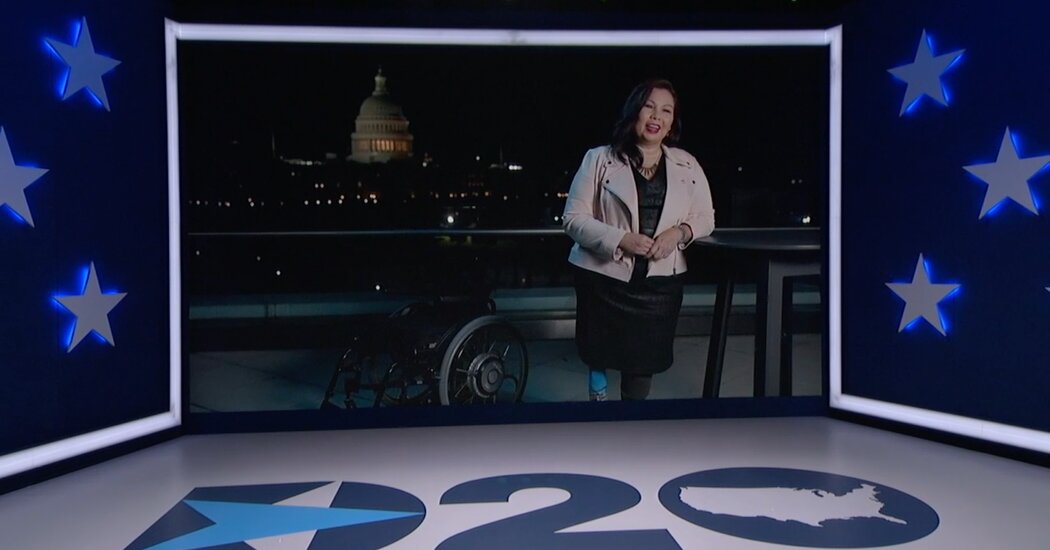