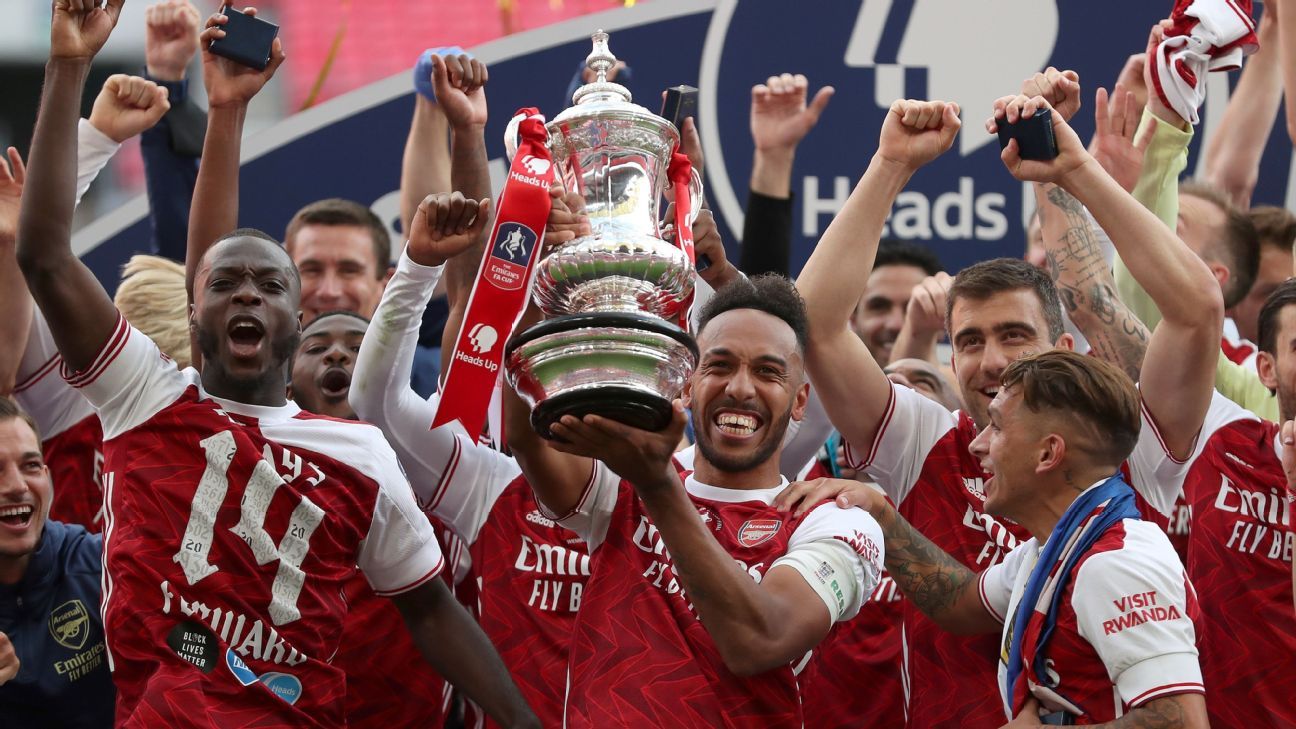 LONDON — There was sadly no crowd to witness Arsenal’s 14th FA Cup final success — a come-from-behind 2-1 victory over Chelsea — but it doesn’t take much to imagine what the Gunners contingent would have sung about Pierre-Emerick Aubameyang: sign him up. The 31-year-old made the difference against Chelsea, just as he did in the semifinal against Manchester City, just as he has done time and again during a turbulent campaign that ends on this most improbable high here at Wembley.

Chelsea led 1-0 through Christian Pulisic’s early strike and threatened to run away with proceedings before Mikel Arteta injected some life into Arsenal in an animated drinks break and Aubameyang sprang to life. He won and converted the 28th-minute penalty after getting goalside of Cesar Azpilicueta before being hauled to the ground. His winning goal benefitted from some equally errant defending as Kurt Zouma was beaten easily, but the skill Aubameyang produced in that moment, feigning to shoot before shifting the ball onto his left foot and dinking a sublime finish over Willy Caballero, was a match-winning moment so few strikers are capable of producing. It was his 29th and final goal of a remarkable season.

Where would Arsenal be without him? Surely they don’t want to find out.

– Catch FA Cup, Serie A, MLS and more on ESPN+ (U.S. only)
– Who qualifies for Europe from the Premier League?

ESPN revealed last month that Aubameyang has requested a three-year deal worth £250,000 a week. The Gabon international has indicated he is willing to stay and Arsenal want to keep him, but their precise summer budget has been indeterminable for weeks with European qualification uncertain. That ends now. Aubameyang may have just secured his pay rise in the most literal way possible by scoring the goals that increase the resources from which the club can boost his salary.

He gave nothing away in the immediate aftermath when asked by BT Sport about his future.

“I’m really not thinking about this,” he said. “I just want to enjoy with the guys and take the trophy now.”

Aubameyang certainly savoured the moment. After dropping the trophy as he carried it over for the lift with his team-mates — the only mistake he made all afternoon — he was the last to leave the field, still clutching the trophy with a broad smile on his face.

The Gunners had shirts made up with “14 Always Forward” on the back to mark the extension of their proud record in this competition. It is also, coincidentally, Aubameyang’s shirt number . Given his influence on proceedings, it felt an even more prescient choice.

He is an extremely popular figure with the players, a point that Arsenal should consider if history has taught them to be wary.

The reminder of how big contracts can go wrong was sat in Turkey as Mesut Ozil, the club’s highest earner on £350,000 a week, was granted leave earlier in the week having not made the bench or been one of the 10 non-playing members each club was allowed into the stadium for this showpiece occasion. Arsenal’s desire to sell Ozil could not be clearer, but where his wage was once a signal of the club’s determination to return to the summit of English football, it is now a financial weight holding up an overhaul this squad badly needs.

Aubameyang is of the same central importance as Ozil and Alexis Sanchez were then. But unlike Ozil, there are no doubts about Aubemeyang’s ability to influence big games, no private concerns about whether he is a divisive figure behind the scenes.

He is a Champions League-quality striker playing for a Europa League-level club. Replacing him will be harder than keeping him.

“He knows what I think about him. I want to build the squad around him. I think he wants to stay and it is just about getting the deal done,” Arteta told the BBC. “But I think these moments will help him to realise and believe that we are in the right path and he is a big part of that. He is loved by everybody at the club. Hopefully he can continue with us.”

Dan Thomas is joined by Craig Burley, Shaka Hislop and a host of other guests every day as football plots a path through the coronavirus crisis. Stream on ESPN+ (U.S. only).

And the belief that Arteta can instigate a revival is now backed up by his first trophy as a manager. He is the first person ever to win the FA Cup as a player and a manager for Arsenal.

Just like in 2017, Arsenal beat Manchester City and Chelsea in the last four to win the competition. This was no fluke, and new signings now have clear, on-field evidence of a new Arsenal team being formed.

They rode their luck at times, of course. Referee Anthony Taylor, the first man to officiate two FA Cup finals in 119 years, did not have one of his finest afternoons, most notably issuing a harsh second yellow card to Mateo Kovacic when it appeared Granit Xhaka stood on his foot.

Chelsea were then at a numerical disadvantage compounded by injuries to Azpilicueta, Pulisic and, right at the end, Pedro, in his final appearance for the Blues. But they did not create enough when enjoying the better of this final, and Aubameyang made them pay. Now Arsenal should too.